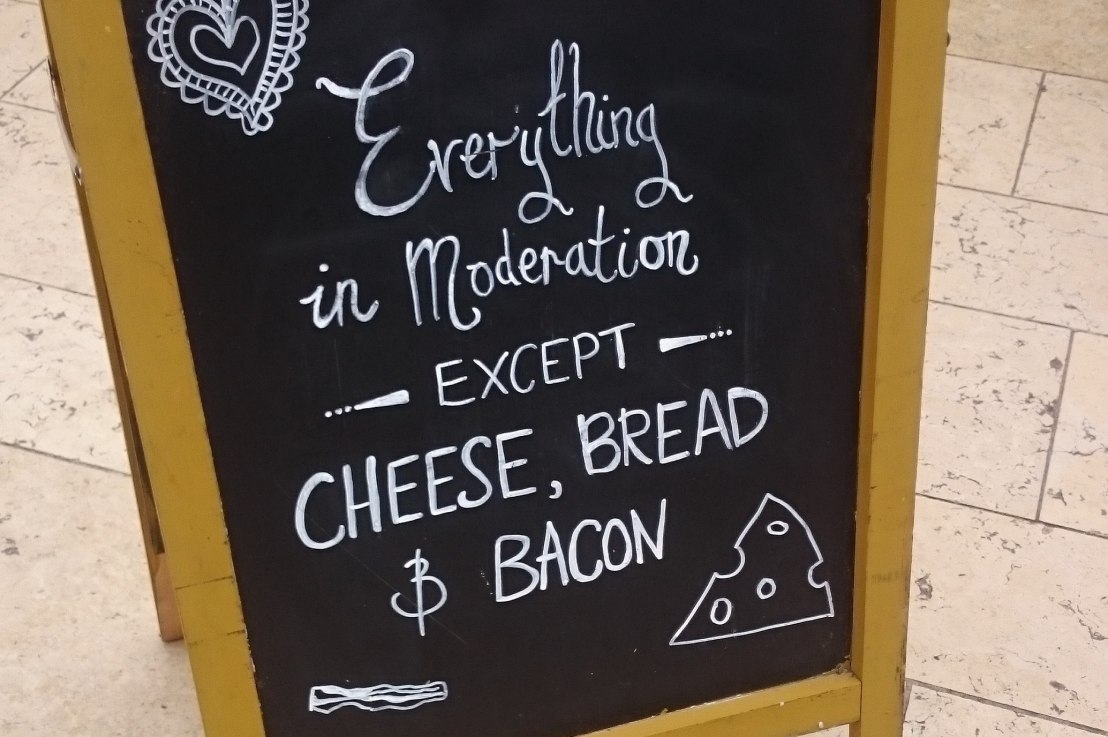 “Everything in moderation” (or EIM, for short) is a hegemonic commonplace in 21st century American culture. That means, it is a belief that is so commonly accepted as to be nearly unquestionable. And it’s a serious problem for supporters of democracy in the 21st century.

The reasons for the phrase’s popularity are easy to see. We need salt and fat in our diets, for instance, but too much salt or fat is unhealthy. A little liquor can be a nice way to celebrate a holiday with friends, but too much can lead to bad behavior, addiction, and death. Solitude is restorative; isolation is destructive. Illustrative examples of things that are good in moderation but bad in excess are countless, but I’ll stop here in a nod to moderation. “Everything in moderation” is so obviously a virtue that it hardly bears a second thought.

But one major problem with EIM being a hegemonic commonplace—that is, a belief we tend to take as a given—is that it is not always applicable. “Everything in moderation” can start to fall apart, for example, when we apply it to political philosophies. “We need a little totalitarian dictatorship, but you know, in moderation.” I’d wager that most people who live in democratic societies would find such a comment curious (I’d hope enraging, but I’d bet actual money on “curious”).

The reasons people don’t talk about “democracy in moderation” are pretty straightforward. We can talk about pragmatic limits on democracy—the need for representatives, for example, or the maintenance of non-public, and therefore non-democratic, decision making—but the idea that we just need a little democracy, not too much, just a smidge, is nonsensical. How do you have just a little democracy? “Democracy in moderation” begs the question of what other systems we’re going to also adopt in moderation. Some democracy in the spring, a light communism in the summer, maybe a nice monarchy in the fall, and a hearty totalitarian dictatorship in the winter, when it’s most likely to thrive?

My point here is that “everything in moderation,” reasonable though it may initially seem, is often not very good advice for making decisions. Sometimes, frankly, it just doesn’t belong in the conversation. But, because it is a hegemonic commonplace, like any hegemonic commonplace, the taken-for-grantedness of “everything in moderation” can show up in places it doesn’t belong, and it can short-circuit thinking even in areas where it doesn’t make very good sense. As a result, EIM can appear to be virtuous even when it’s actually really dangerous. Such is the case of politics and media in the current moment in America (and really, for at least the last decades, but probably longer).

In late December, as just one example, Chuck Todd gave an interview to Rolling Stone to promote an upcoming MSNBC special about political misinformation and disinformation, which he is suddenly all worried about. Todd is the Political Director for NBC News and the current moderator of NBC’s wildly popular political show, Meet the Press. Despite being one of the most influential (and presumably most knowledgeable) political commentators in the country, Todd admitted that he was “just so absurdly naive in hindsight” about American politicians’ willingness to spread conspiracy theories and misinformation to accomplish their political goals. Todd was specifically talking about Republicans since Trump’s election in 2016, but the party affiliation is actually beside the point here.

As Jay Rosen helpfully points out at PressThink, a key premise of Meet the Press is that there is a basic symmetry between the two major political parties. Todd is just now realizing that symmetry doesn’t exist anymore, if it ever did. Rosen is not the only person to observe this premise, nor is it the first time he’s found good reason to comment on it. Nevertheless, the assumption of symmetry that Rosen notices really is grounded in the “everything in moderation” commonplace. EIM is the backbone of “both-sides” political press. If you have a Democrat on, it only makes sense to have a Republican for balance. Give everyone a voice and the plurality will naturally moderate the conversation.

As Todd (finally) figured out more than 2000 years into the common era, and probably at least 3000 years too late, the assumption that moderation will magically materialize if you include a little bit of “everything” is plainly not true. Never has been. There is no state of equilibrium to which political discussion naturally resolves. Apparently no one bothered to tell him, and he wasn’t smart or curious enough to figure it out on his own until, like, yesterday.

I’m picking on Todd here, but he is not uniquely blinkered. The New York Times, the Washington Post, and CNN, three supposedly liberal news organizations, are constantly playing the both-sides game, often to what seem like painfully ridiculous ends.

(The supposition that there are two sides is another major problem. In short, there aren’t two sides to every issue—there are an endless number of sides, but they’re collapsed into two because it’s more marketable. But that’s another problem for another day, or hey, read this post, which includes a fine explanation of the problem.)

But it’s not ridiculous if your guiding belief is “everything in moderation.” When EIM is your basis for decision making, even if it’s unconscious, then a little racist science—as long as it’s just a little—isn’t so bad (for an example, you can check out Bret Stephens’s recent NYT op-ed about the superiority of Ashkenazi Jews, but I’m not linking to it). Or short-circuiting discussions about whether or not a Supreme Court justice nominee sexually assaulted a woman (or several women) and lied about it is fair game—after all everything in moderation. So maybe just a little good-hearted reflection on his carpooling prowess. Don’t get carried away though! Anti-deliberative, rape-obscuring deflection should be done in moderation!

CNN, for its part, has repeatedly hosted and/or hired people pushing racist conspiracy theories (Lou Dobbs famously engaged in birtherism for months before he was taken off-air), people advocating discrimination and violence against LGBT people (at least until 2013, CNN regularly hosted guests from the Family Research Council, an organization deemed a hate-group by the SPLC), and people accused of physically assaulting members of the press (dude, they hired Corey Lewandowski). Because “everything in moderation”—taken to a logical extreme really can mean “EVERYTHING.” Not too much, of course. Just a little.

For CNN, the NYT, and WaPo, and frankly for the vast majority of politics and news organizations, EIM short-circuits their ability to think carefully about what they’re actually doing to public discourse. As a result, someone like Chuck Todd can sincerely claim in 2019 that he didn’t notice that some people weren’t playing by the moderate rules. It’s like they were taking advantage or something.

Put another way, even when “everything in moderation” starts to break down as an value for some people, it can remain an unquestioned value for others because it’s hegemonic. It’s just taken for granted. In those asymmetrical circumstances, people who are willing to act immoderately can wreak profound changes on the culture almost without challenge.

In and of themselves, profound cultural changes are not necessarily bad. But when powerful people like Chuck Todd, CNN executives, and decision makers at the NYT and WaPo ignore those changes and carry along as if everything is the same as it always was, it’s a recipe for bad things. Because they’ve been including “fascism in moderation” and “Nazism in moderation” and “white supremacy in moderation” in their “moderate” coverage for decades without stopping for two minutes think if that’s good standard to work by. And they’ve blithely ignored everyone yelling at them to pull their heads out of their moderation.

Of course, the appropriate reaction to “everything in moderation” is not “everything to the extreme.” The appropriate next step, which Todd is hopefully sincerely beginning to take, is to begin to notice how EIM and false balance shape our thinking and how they allow coverage, commentary, and conversation to progress in ways that we don’t want them to. And when you have the chance, to act and advocate differently.

Not everyone is Chuck Todd, however, and not everyone has the opportunity to reshape the political landscape. But “everything in moderation” also has serious, and potentially damaging effects on how voters look at the candidates. In the moment, this is Democratic voters. There is a pretty common assumption—in the political press and also among individual voters—that there is a sort of moderate equilibrium on the table in the 2020 election. But moderation is a chimera. It’s a moving target in politics and always has been. Or rather, moderation as a value can appear to stay constant even when the grounds for moderation have moved radically to one extreme or another, but it ain’t.

Aiming at moderation does not absolve us of the responsibility of looking carefully at our candidates, at their records, at their policies and actions. It is not a substitute for making careful, thoughtful decisions. Moderation will not save our politics any more than it’s saved Chuck “Absurdly Naive in Hindsight” Todd from looking like a novice.

One thought on ““Everything in Moderation” Doesn’t Prevent Extremism”